A puzzle platformer where you can swap player with blocks.

Music I used for the game

For Mac and Linux users:

I don't have option to test Linux and Mac version properly so please tell me if it contain any bugs. I would love to hear any feedback.

Also literacy in this game is bad. Lol.

Thank you for support! Please tell me in the comments if you interested in full & remastered version of this game in Steam for a small price.

great game, I could see it becoming something like a 2d portal with a little work.

why is w jump, but not the up arrow key?

Ok on wepage but unplayable on ubuntu, mye you could get a ubuntu develeper to help you, but overall, good game :)

Thank you for feedback!

Wow! It was unexpected! I hope they liked it!

Awesome game man!
How long did this take to make??

few months I guess...But it was my first game so I was learning Unity while worked on it.

its a great game, fun puzzles, not so hard (maybe except level 41 and 48 ;)) really calming expirience and great music. Not long but still good!

great game so much fun

I'm not big on puzzle games. And I don't know why, but this managed to strike the perfect balance between action and logic (+ some really chill music) to keep me super engaged and relaxed for the entire 30 minutes it took me to beat it.

This is such a good game. I loved it, thank you!

Thank you for playing!

Hey, anyway I can talk to you about this game? my email is Jupiter@ArmorGames.com

Also the game doesn't work that well if you use a controller...

I can say that it's really well made! Controls feel great, animations and movements are smooth, and I'm a huge fan of the minimalist style you adopted.

I give just a negative note to the fact that the wrap to the next level is not visible since the beginning: I would have preferred it to be already visible (while locked), so I didn't have to go to activate it by myself and see where it is (I feel it may be a little but still frustrating time consumer for some players).

Overall, it's a really good game, and I'm looking forward to see (and replay) it finished!

Thank you for feedback! I decided to make some exits not visible(not active) to add some challenge but it seems like most of the players didn't really like it. I'll think about fixing it.

I LOVE this game soooo much

I think the idea is really cool! I personally think that a lot of the levels when the blue box is first introduced feel kinda the same (shoot bullet and then move to the spot where you want the box to go.) Maybe you could have the blue box and the box at the beginning of the game that you can push around in the same levels earlier on to mix up the levels a bit? Anyway good luck with the game it seems like it has a lot of potential.

Dude thank you for this game just played

Thank you for playing!

thank you for coding testing designing graphicing and sharing your game with the 🌎 . How’s it feel to see so many folks play your game?

I'm really happy that most of the people enjoing my game. To be honest I didn't expect that many folks.

Hey! Saw your game on Reddit the other day and had to check it out. Really cool concept and I thought it was executed really well. Nice work!

* I agree with some of the other commenters that controller support would be good too.

Played through the entire demo and had a lot of fun. Some of the levels were pretty tricky (mechanically) to complete!

I particularly liked the puzzles related to conservation of momentum, but it took me forever to realize that I could jump again after swapping (Looking at you level 43!).

It would be interesting to see some more mechanics that incorporate timings and encourage you to have multiple bullets in the air.

Keep up the good work!

Thank you for playing my game!
Yeah, level 43 is pretty tricky so I probably should add little tutorial level before it.

Also I'm already thinking about levels that include multiple bullets in the air so it probably gonna be in the next update.

Reply
Will Riddick2 years ago (1 edit)

-I would say that you should add an empty ammo noise when you try to shoot as well as making it more obvious that you have limited ammo when you first introduced it because it took me a couple seconds to realize there was ammo considering the limited feedback and the limited tutorial, yes its in the corner I just didn't immediately look for it there

Now for some ideas if you would like some:

-Also I think screen wrapping--for the player and the bullet--could perfectly suit this game, not in all levels obviously but still

I will add empty ammo sound and closed door sprite in next update. But I still belive that you can create some interesting situation in gameplay if player didn't know where is exit position.

Also this ideas are great! I'm just a newbie so I'm kinda forgot about screen wrapping(this is my first game) and it's probably gonna work for most of the levels.

Will this be released for Mac? I saw this on Reddit and this totally has potential.

I would release it on Mac and Linux as soon as possible!

The game is really cool! I like the concept, I think there’s some real potential here. The art and ambiance, really minimalist, is awesome! One thing though, I’d like to play with a controller. I don’t feel conformable with the keyboard is such type of game. Can’t wait for more!

Thank you for feedback! I would add controller support in my next update as soon as possible! 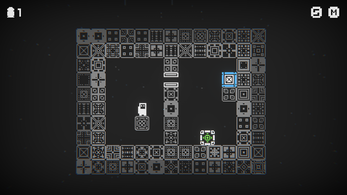 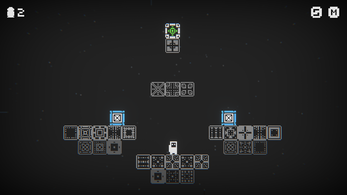